More Proof of 5776 Being Our Last Chance

בס"ד
I received this comment from a dear reader who has contributed immensely to helping us have more faith and trust in Hashem’s plan. I have followed the comment with some much deeper thought for the skeptics. First the comment:


To Everyone around the world, The following is from Rabbi Matityahu Glazerson
discussed on YouTube, but I will post it here, as an addition to RAV Menachem
Robinson's efforts to bring us wisdom and understanding of what is to come,
and to be prepared. Enjoy the Below

In order to understand Rav Glazerson’s assertion that there are many hints that the Hebrew year 5776, which corresponds to September 2015-October 2016, is favorable for the appearance of the Messiah, it’s necessary to be familiar with gematria, the system of Hebrew numerology.

The English translations of the eight Hebrew phrases that Glazerson mentions are:
The G-d of Abraham, the G-d of Isaac, the G-d of Jacob = 776
The kingdom of David will be eternal = 776 (The Messiah is a descendent of King David.)
Come back to Me and I will come back to you = 776
G-d says, “I will do for Myself. For Myself I will do.” = 776
Come back to Me like naughty children. = 776
Your kingdom will be forever = 776
The last kingdom = 776
The final one is the most fascinating.
The coming of Messiah = 776

When questioned by Shaw, Glazerson explains why the numerical value of all these phrases is 776 and not 5776, which is the full number of this Hebrew year. “Because you see, according to our [Jewish] tradition, Messiah will come in this millennium – in the sixth one. This is why the numbers don’t have the 5 here, because it’s self-understood that when you speak about Messiah, you relate to 5,000, the sixth millennia.”
To all, if you wish to see Rabbi Glazerson give his presentation to the above
you can go to YouTube.
DOVID

My response and additional comments:

I thank you very much for that additional encouragement that this is the year, 5776. Even though I can add it to the hundreds of proofs that I have seen, all from Hashem, that 5776 is the year of Moshiach, what you have presented from Rav Glazerson is actually a weak proof.

If one looks at the gematria which found in many, many places supporting this year, can one be as reassured as seeing a star in the sky that is healing all the righteous and killing off all the wicked, and is about 40 to 50 times the size of the moon? Here is the relative size of Nibiru (this picture is the way Nibiru appears and will be seen soon (ignore the Hercolubus name, it is another lack of information): 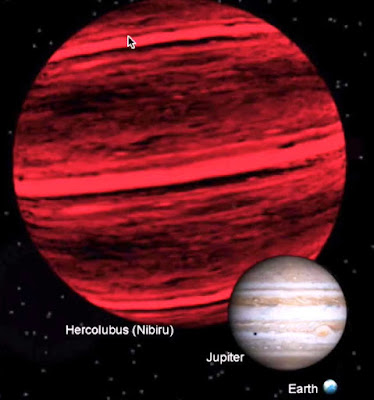 Many are saying "that this didn't happen yet, and I haven't personally seen this Nibiru that so many are talking about.” If you answer that way, then give me an answer why we are having such a great increase in the number of severe earthquakes (a 6.3 earthquake in Russian yesterday, that didn't even make the news), a massive tsunami in Brazil recently (that didn't even make the news), more active volcanic eruptions happening in a day than we used to have each year, crazy weather, sinkholes, massive amounts of fish and birds dying, a change in the position of the moon and the sun, the effects coming from a great change in the magnetic fields on Earth (look at a compass and see where north is now), a change in the axis of the Earth, an anticipation of pole shift, a change in the levels of the seas around the world (global warming due to the increase in magma activity under the crust of the earth, not Al Gore), warnings from countries all over the world to get ready for disaster (without one country telling what the disaster is), underground cities being occupied by the evil global elite, etc, etc, etc (the list is too long for here).

Ignore what is going on outside ones window, and please, just give me an explanation why it is all happening. Yes, it is Hashem at work bringing the Geula and Moshiach. It is so obvious, that only a fool would throw away his or her entire eternity with excuses. After all, don’t research any of this, just use your flawed human logic, you know, your gut feeling, it has probably never been correct before, why not let it get you in terrible trouble now?

If everyone who wants to survive and avoid great suffering would only follow the simple instructions of Hashem instead of coming up with nonsense about why they are so ignorant to the obvious, they would instantly join the 1/3rd group -- such a bargain.

One additional note: Even though the process of Geula and Moshiach is happening within the next few weeks, there is a great possibility that some of the many activities to come in this very extensive world change will continue into 5777. The fact that Rav Glazerson found both 5776 and 5777 in the Torah is an indication that there is going to be a continuation of the Geula process after Rosh Hashanah. Let us stop thinking so simply, trying to read the Mind of a Source of Infinite Intelligence, and realize we are completely at His mercy with everything that is coming.

Let us do our part as Hashem instructed us, and let Him run the entire show, which is what is happening. Ignorance is not bliss; it is extremely dangerous and painful!!!!

Dovid: I humbly apologize for using your comment to post this answer, but I am getting so many comments and individual Emails from skeptics and negative individuals who are shooting themselves in the foot (and all their loved ones in the heart). The information you brought over from Rav Glazerson is totally valid and fascinating, but I am anticipating some ignoramus writing to me and saying "big deal." If they say that, they better have an answer to all the obvious events that are happening because of Nibiru; that is a big deal.  If you think that I am incorrect about the many, many hours of research I have done, then answer me with your extensive research.  Show me your proof positive that you found, especially in scriptures (you know, Hashem's opinion).  You give me absolute proof to the contrary, and I will so humbly apologize to the world.

I thank you Dovid for all the wonderful comments you have sent and hope that this one will rattle the cage of those who think that being a skeptic is an option.

It is not easy to save people's lives.