Message for the Week of Sukkot 5774


I urge you, please read the latest vital message on "Geula Messages" from Rav Nir Ben Artzi for the week of Sukkot 5774:

I thank Devash for continuing this ever so important mitzvah.  I am in touch with many individuals by personal Email, Skype, telephone and in person who have told me that Rav Ben Artzi is having an impact on the thoughts of Jews around the world.  I believe the Teshuvah that happened during the Yomim Tovim was more intense as a result of his words and advice.  Since his predictions have been very accurate, many are believers that what he is saying about the near future is right on target and a great influence on many people around the world.  Proof of that is that there are Israeli and even Arab publications who have taken notice and continue to pay attention to his words.

Just remember, whether you believe and accept his words or not, the truth does not go away.  Reacting to his rhetoric is very prudent and will save you much anguish in the near future.  You can either believe what I am telling you or find out the hard way what you should have done.  Don't be mistaken and cause unnecessary suffering for you and your loved ones.  Skeptics are losers.  Be a winner and truly know that the messages from Rav Ben Artzi are from Hashem.  He has passed the test of a Prophet (Devarim 18:15-22).  Know for sure that Rav Ben Artzi is giving you messages from Shamayim -- to ignore it is highly dangerous.   It's your eternity -- make it the best.
Posted by The Absolute Truth at 5:32 AM 8 comments:

The Final Hours of this Golus

The Final Hours of this Golus

I want to say today that the world has become so wild, senseless, and irrational.  If we don't just trust in Hashem there is no way we can get up every morning and get through the day. When you have all of these crazy things happening around you, all of these things that seem to go against one another, be directly opposite each other, when the same people are saying two opposite things with the same conviction, well  it’s definitely maddening and is very hard to get through it.

If we have true Emunah and Bitachon in Him we will be O. K. We can even eat the poisoned food, we can even be not too afraid of the police, and we can even be in the most dangerous situations, and we don’t have to fear. He took us out of Mitzrayim whole. He will take us out of this Golus whole. He will negate the poisons. He will negate the radioactivity. He will negate everything that can cause us harm, and we are going to come through all the difficulties with great Nissim (miracles) and Rachamim (kindness, pity).  But on one condition, that we hold on to Him, so-to-speak, and not let go. That we hold on to His Torah and try to fulfill His Ratzon (will). And that’s the only protection there is in this confused, polluted, horrible world full of evil people.

How many Jews will survive? I cannot say. It won't be nearly as many as claim they are Jews; that I do know. But don’t forget, the world is poisoned from the grass to the sky, from the land to the depths of the ocean. It is poisoned, poisoned by the evil ones, by the evil people running the world or thinking that they run the world. But we will be protected. They couldn’t kill us in Mitzrayim. They couldn’t destroy us anywhere. They couldn't stamp out the Jews in any place. Not with poison, not with gas, not with bullets, not with swords, they couldn’t get rid of the Jewish people. And now we still will survive. Even the leaders of the state of Israel won't be able to eliminate the real Jews.

I want to beg Hashem to put an end to this Golus already. It's too hard, and it's too painful, and I can't bear to watch how the Yidden are suffering. The whole world is suffering, but most of the Goyim have brought it on themselves,   and are making a tremendous Tikun for all the evil that’s been done throughout the generations. I can't wait to see Moshiach come and reveal himself and dash all the false beliefs of all the people that believe in the false prophets and in the false messiahs. I can't wait to see it. I can't wait! I'll be so happy, and all the Yidden will be so happy, and the world will be happy, and Hashem will clear out the poisons and bury all the dead, and we will again be one with our Hakodosh Bourch Hu, our Father in Heaven.

We, His wayward children, will finally come back to our Tatti and we will be complete and loved and unafraid in His embrace.
Posted by The Absolute Truth at 9:45 PM 3 comments:

Moishela: I saw the live chicken and saw the chicken after it was Shechted. I saw it laying in a pool of blood and I felt that this is a warning of all the violence that will be in the world this year. תשע"ד  will bring the worst of the Rishus (evil) to the surface. I know that it is all for the good but still it is very frightening.

It is just like the chicken after the Shechita. You see its lifeless body and its blood staining the ground. One's heart goes out to the poor dead animal and you feel depressed. But that chicken was killed according to the laws of kashrus that were brought down and given to Am Yisrael at Har Sinai in our Holy Torah. It then becomes a nourishing meal for a Tzaddik who makes a Brocha on it to thank Hashem before and after he eats the chicken.

Really that chicken that looked so gruesome just a short time before, that was killed in a seemingly harsh way, comes back to life with a Brocha  and having the Zechus of being the food that sustains a Tzaddik or even a simple Jew. Such a chicken never really dies; it just takes on a new form. It changes its worldly disguise to a spiritual form.

Now that I said all that, I can also say that when I was looking at the dead chicken I felt that תשע"ד will be a very difficult year.

I plead with Am Yisroel please do Teshuva NOW! Throw away all your stupid toys, throw away your silly pass times. Live only to do your Creator's will. Love your fellow Jew, and don't wish him harm.

All Yidden Frum, or not, that cause harm to their fellow Jews, that have jealousy and hatred in their hearts for their own kind, those Jews who participate in actually being Malshinim (informers to the authorities) or just physically getting pleasure from seeing fellow Jews hurt or dishonored, those Jews whoever they are, whether they are important people of the community or lesser people, they are not Jews. They are Erev Rav!

So I beg all true Jews, Jews that can have love in their hearts for their fellow Jews, do Teshuva NOW! Discard all excess Gashmius, build a true Jewish home where the husband is an Oved Hashem and an Ohev Yisroel and a Baal Chessed and one that learns Torah, where the wife is a true Tzniusdik Eshes Chayil and the children are Temimusdik, sweet, Erlich,  well behaved, and truly believing in Hashem. That is a true Jewish home, a true Bais Hamikdosh Mi'at.

Come back Am Yisroel!
When I looked at the dead-lifeless chicken I became very sad. But then I realized that the chicken gave its physical life in order to sustain the Tzaddik. The chicken still exsits but in a much higher form .And we human beings too will live on Be'ezeras Hashem. We won't need to be Shechted if we are ready to sacrifice our whole selves to the will of HaKodosh Boruch Hu. This living Al Kidush Hashem, this changing of our physical form to a more spiritual one, will prove that our Neshomos are the Neshomos of the Jews that stood at Har Sinai. And those so-called Jews that do not do Teshuva in such a way, will be Shechted like the chickens, but not in Kedushah, and they will just disappear. Their carcasses will be thrown to the dogs and will be food for the Sitra Achra.

Excuse my graphic descriptions, but too few people are waking up. Maybe this will help some people do something right now to come back to the truth so their suffering will be much less in this coming year. תשע"ד will, Bezeras Hashem, bring the whole world through a most difficult time but will clearly reveal the road that will bring Be'ezras Hashem all Am YIsrael to the   Geula Shelaimah.
Posted by The Absolute Truth at 4:28 PM 2 comments:

Message for the Week of Shabbat-Yom Kippur 5774

I urge you, please read the latest vital message on "Geula Messages" from Rav Nir Ben Artzi for this week of Shabbat-Yom Kippur 5774:

http://geulamessages.blogspot.co.il/
Posted by The Absolute Truth at 3:44 AM No comments:

Message for the Week of Parshat Ha'azinu - Rosh Hashanah

I urge you, please read the latest vital message on "Geula Messages" from Rav Nir Ben Artzi for this week of Parshat Ha'azinu - Rosh Hashanah:

http://geulamessages.blogspot.co.il/
Posted by The Absolute Truth at 9:17 PM 2 comments: 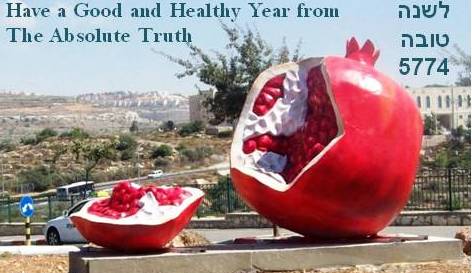