I’m happy to say I received some very good suggestions for myths.  Why am I so happy about it?  I just happen to know the answers.  If I had to look it up I wouldn’t have been as happy.

Back to business.  Dealing with the Adam and Eve story, there is a myth that the forbidden fruit was an apple.  That probably goes back to the Bible story that we heard when we were 5 years old.  One reader suggested that Malum is apple in Latin and is the same word for evil.  When translated from the original text it could have been misinterpreted.  I am not familiar with the word but that is the sort of misunderstanding that has been handed down through the years (thank you for that insight).  So what was the fruit?  We get a hint after the sin occurred.  They realized they were not clothed (a polite way of saying you know what).  The commentary states that they took leaves from the tree that they ate from and the leaves that they took were fig leaves, which are bigger.  Hence, they must have eaten figs.

One might ask:  was the sin of eating the forbidden fruit so severe that it should cause close to six thousand years of problematic history for us needing rectification?  There are two answers.  One that I will mention today and the other is complicated enough to deserve its own blog post.  Today’s answer:  Hashem in his mercy is forgiving once we repent our sins and follow-up with corrective actions.  If done inadvertently, we are forgiven.  Adam sinned.  When Hashem asked him what he did (Hashem knew, He was testing Adam), Adam answered “it was that woman you gave me – she made me do it.”  Not the best repentance; but, instead it was the first tattletale episode.  Even worse, he blamed Hashem – You gave me that woman.  The full answer is much deeper and that is the part I hope to blog in the near future.

Next topic:
The miraculous splitting of the is another very misunderstood episode.  First of all it is not the Red Sea but the .  The story goes that in the 1800’s there was a non-Jewish Bible printer who was proof reading his layout and came across the name the .  Even though it was totally correct, he thought it was a spelling error and changed it to .  Even though we know that throughout Jewish scriptures is the name Yam Suf which means the , this printer’s mistake was adapted by many other printers and became the new name of the sea.

Then we have the scientific explanation of why there was no miracle but merely a fluke of nature.  The so-called experts explain that there was actually a ridge in the water and that a wind came along to expose the ridge allowing the Israelites to cross.  That explanation eliminated all the miracles involved and even diminished the C B DeMille version (The Ten Commandments) which was also totally inaccurate.   What were some of the miracles that everyone ignores?  The main purpose of Hashem trapping the Israelites at the sea was to show them once and for all that Hashem is there and protecting them.  He made it look hopeless but it was a setup.  They were on a very large beach area that had mountains behind and only one entrance.  That way when the Egyptians arrived they had only one passageway to get to the Israelites.  This made it simple for Hashem to block the Egyptians with the pillar of fire.  The sea did not actually split, but instead 12 separate tunnels formed – one for each tribe.  They entered on completely dry land.  The walls between the tribes were hard vertical surfaces yet if the Israelites were thirsty, they could put their hands into the wall which would become good drinkable water.  They did not cross the sea but instead the pathways became semicircular and cause them to exit the tunnels on the same side (according to the Talmud). 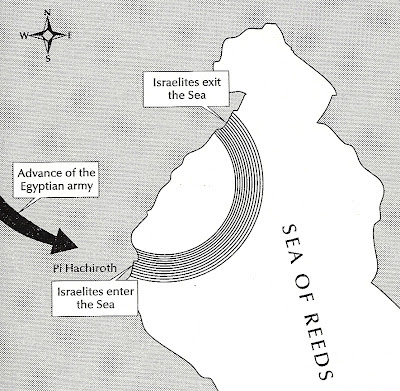 When the Egyptians entered and where completely into the sea area, the ground became soft, the horses stopped (controlled by Hashem), the chariots were mired in the mud and the sea closed.  The walls of the sea remained hard surfaces not just to drown the Egyptians but to injure them as a wall falling on them.  Their bodies were washed ashore for the Israelites to see since (all within the same beach area).  Hashem buried the Egyptians by having the ground open and swallowing the bodies.  After that day the Egyptians were seen no more and the Israelites were in total awe of the power of Hashem.

The most amazing thing is that Hashem has provided for us to see further proof of the event.  In recent years chariot wheels have been found at the bottom of the .  Here are some of the many pictures: 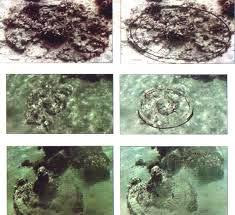 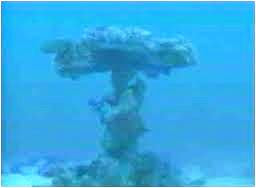 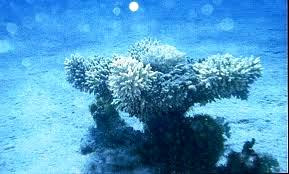 There are so many other miraculous details about the Exodus from that, once again, I could write a book.  Some very curios examples to whet your appetite:

·        There were an estimated 2 ½ to 3 million who left and miraculously they left immediately.  How long would it take for that amount of people with all their belongings to leave and travel into the desert?  There is more happening here than meets the eye.
·        They were surrounded on six sides by the clouds of glory.  It is even brought down that they were in a climate controlled atmosphere and actually rode on the clouds (definitely not the movie version).
·        On of the factors that determine a kosher animal is that there are no physical defects or blemishes.  This is both outside and inside the animal.  Since the animals were used in the portable Tabernacle for offerings, they had to be perfect.  One can inspect and see the external acceptability of the animal, but as is done today, the internal situation can only be determined once the animal is killed and cut up.  That was not the case in the desert.  Are you ready for this?  The pillar of clouds that was leading them through the desert was actual an X-ray machine.  They were able to place the animal in front of the cloud and see if it had internal blemishes.
·        During the 40 years in the desert, they ate the manna that fell from Heaven everyday.  The manna would take on the flavor of whatever the Israelites had a craving for.  The manna also got completely absorbed in the body meaning that for forty years there was no need to go potty (once again I am trying to be polite with my words).
There are many more myths to discuss but, once again, I am going to end it here and hopefully will continue tomorrow.

One more topic dealing with a personal request.  Today is the Yahrzeit (anniversary of the passing) of my mother, Rivka bas Menachem.  I want to dedicate today’s learning to her memory.  Her neshamah (soul) should see an aliyah (a going up or an elevation of spiritual level) in Shemayim (Heaven).  A little explanation is in order, considering that this blog is to teach about Judaism.  When a person leaves this world, whatever they have accomplished here is reviewed by the Heavenly court (the concept of judgment day), and their fate for eternity is determined.  The answer here is not just Heaven or Hell but at what level one has earned within the place designated.  The one who has passed can no longer help himself or herself.  What happened during the time of correction in this life is what determines the final destiny.
However, those left on Earth, loved ones, friends, etc can help those who have gone on.  If a Jew needs correction, he or she will only go to Hell, at maximum, for one year.  That is why commemoration or the departed Jew is observed everyday within the first year.  The effort of loved ones on Earth can actually get the deceased out of Hell sooner.  As already mentioned, whether it is the first year or beyond, the person is greatly helped by those on Earth.  By studying Torah in a persons name; saying the Kadish prayer on the person’s Yahrzeit; giving charity in the person’s memory; if it is a day that the Torah is read in the Synagogue, going up to the Torah and saying the blessings; if it is a parent or grandparent, being an observant Jew and observing all the commandments, gives merit to the parents and grandparents all year round.   Of course, most of these observances can be done all year round, not just on the Yahrzeit.  A very different concept in Judaism than in the secular world is that Mother’s Day, Father’s Day, Thanksgiving Day and many other wonderful occasions comes everyday – not once a year.

I have been saying all along, being an observant Jew or a righteous gentile has tremendous advantages many of which are not obvious at all.  We will all find out what this means to each and every one of us but, unfortunately, on the “too late date.”  Now is the time for action.  Have a good life.
Posted by The Absolute Truth at 9:25 AM