A New and Much More Dangerous Form of Jew-Hatred

בס"ד
I have been asked to talk about a different form of Jew-hatred that is very subtle, yet more dangerous than what we have experienced for thousands of years. We have had such tremendous proof of the end of days and the introduction of Moshiach being imminent that all Jews and righteous non-Jews should be flocking to the fold, turning to Hashem and speeding up the process. Yet there is a form of ignorance in this world that is killing it for everyone. All good news is being distorted.

As an example: there is so much proof of Nibiru being seen, getting close, causing mayhem in the world and fulfilling many, many prophecies; but, if you look at the videos and articles on the subject, they include false information about the so-called second coming of a false messiah, a false prophet and, even worse, calling him god. If it isn’t part of the video or article, the comments below are so disgusting and dangerous that every Jew who knows the truth might start to have reservations. The old expression: When something is lied about constantly, people start to believe it.

Why is this so dangerous? If a Jew or a righteous non-Jew knows the absolute truth about the imminent worldwide redemption and the real Messiah, that person is in good shape for a beautiful eternity of happiness, goodness and peace – that person is in the 1/3rd group (Zechariah 13:8). If someone living the truth can be swayed towards heresy and evil falsehood, that person may lose it all for him or herself and the loved ones involved. All lies being told are dangerous.

The more disturbing cases are when the article or video is from a Kosher Jewish source, and idolaters distort the beautiful message. Instead of helping people to reach a wonderful Tikun, in their total ignorance, they are trying to send you in the wrong direction that could result in terrible retribution – the 2/3rd group. When Rav Glazerson shows codes in the Torah, he is telling us messages from Hashem to help us. When somebody leaves a comment that the Rav is giving you proof of yushka coming, it is worse than that person killing you with a gun.

We have seen throughout history how Jews have been persecuted, tortured and killed, but they died Al Kiddush Hashem (Sanctifying G-d's Name) giving them an eternity so wonderful, it is beyond our comprehension. That is because they killed the body, not the soul. But, when they try to take away the truth from you, take away the Words of Hashem, they are trying to destroy you for eternity.

I have been asked to give details on one of the worst distortions on the web, one that has grown to such a Chillul Hashem (desecration of the name of G-d), that it could only result in destroying good people forever – I am referring to the message left to us by Rav Yitzchak Kaduri, zt”l. Rav Kaduri was a renowned Mizrahi Haredi Rabbi and Kabbalist who devoted his life to Torah study and prayer on behalf of the Jewish people.

About 100 years ago, while studying with the famous Ben Ish Chai (Rabbi Yosef Chaim of Baghdad, d. 1909), Rav Kaduri was told three predictions. The Ben Ish Chai told him: 1, he would live to an old age; the Rav was about 108 (give or take, his birth year is not definitely known) when he left us in 2006; 2, he would never wear glasses, which he never did; and 3, he would meet the Moshiach. Rav Kaduri met Moshiach on 9 Cheshvan 5764 (Tuesday, 4 November 2003). Rav Kaduri left a note with his son that has the name of Moshiach encoded.

Fact: The note is for real, but is was changed by very evil sources to try to make it look like Rav Kaduri was saying he met with yushka, chas v’shalom. Here is the note with the changes: 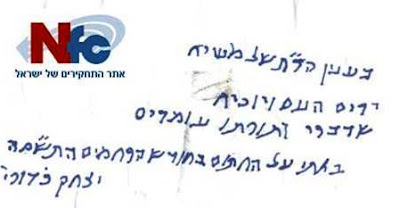 There are two changes to the Hebrew letters (one changed and the other added) that make no sense (would never be said in Hebrew) but are needed to give a false prediction of the Moshiach’s name. The added letter does not match the way Rav Kaduri writes that letter since that letter appears about 9 other places in the note. Go to the note. Look at the third line down, the sixth letter in from the right (it is the first letter of the second word). Then look at the letter two letters after that and the letter at the end of that word -- they are the same letter. The Hebrew letter vuv which looks like this "ו" appears very differently in the other places. It also doesn't make any sense and would never have been put there by the Rav. The extra letter means that the first letter of five consecutive words spells “יהושע” Yehoshua, or Joshua.

Rav Kaduri wrote this note to 34 other righteous Rabbis, Tzadikim Nistarim (Rav Kaduri and Moshiach make up the 36 for the generation), to tell them the name of the Moshiach and possibly when he will be announced. The method of hiding the name would probably be ATBASH, ATBACH or one of many other very hidden ways of encoding information (Google it). These are methods of folding the Hebrew alphabet and/or substituting the letters. This information is top secret and would never have been given as the first letter of consecutive words. There are Rabbis who definitely know this since they were students of Rav Kaduri. One such Rabbi is my neighbor who studied with Rav Kaduri for 15 years. We live about 15 minutes from Jerusalem.

It is fascinating to me that if one is ignorant of Hebrew, since it is obvious that the note has been doctored, and if one is ignorant of Jewish scriptures, it is very easy to fool the public into thinking that Rav Kaduri said yushka is the Moshiach. Unfortunately, there are many videos and articles expounding this evil lie. I have yet to hear from one individual, and I have challenged many, who could tell me any place in scriptures where yuska uses the name Joshua, in Hebrew Yehoshua.

Ignorance is not bliss, ignorance is dangerous. By the way there are more Christians converting to Judaism or becoming Bnei Noach these days than ever in history. The truth is obvious -- Yehoshua is not in the note and yushka has never called Joshua. Lies, all in the name of Jew-hatred.

The Moshiach is definitely here already, living in Jerusalem and has already been anointed in Heaven. He will be anointed on Earth soon. The 2000 year old debate no longer exists -- the Moshiach is not yushka and Rav Kaduri verified it, even though he is not here to defend himself.

We are told in Jewish scriptures the possible names of the Moshiach and yushka is definitely not one of them. Who is he and when will he be announced? I don’t know – I said it is top secret. There are many indications that it is imminent (I have a Rav Ben Artzi message for this week, being translated that may give you a surprise answer).

Go to the real Bible, to the book of Obadiah which tells of the end of Edom. Edom is Christianity. That is a definite fact which is easily proven, and we are very close to the prophecy being fulfilled -- guaranteed in writing from Hashem. Don’t be fooled by evil idolaters who want to destroy you forever. Learn the absolute truth and live it, it is much better for your health – physical and spiritual.

For thousands of years, the world has used the Jews as scapegoats and blaming us for everything that goes wrong in the world. The big difference now is we have a far better way to advertise the hatred. The web, TV, radio, availability of articles, books, etc has made the dangerous distortion far easier to disseminate. It will all end soon. The only concern that I have is that there are good people who are not so educated in the absolute truth and could go astray by this distortion. Don’t be fooled by the ignorance of the world. You have the choice of being in the 1/3rd group who will survive and thrive for eternity, or the 2/3rd group who are doomed to great suffering and throwing it all away. It is our choice.

"A Star will Rise from Jacob - 5776 Nibiru in Bible code"
https://www.youtube.com/watch?v=UYN9KoF51zE

Posted by The Absolute Truth at 4:28 AM