One of my favorite subjects is the hidden codes that are found in the Torah.  Why?  Being an Engineer, I have always been a skeptic, who wanted proof about everything before saying that this is the absolute truth (there's my favorite expression again).  Even though I have been studying Torah and scriptures for about 64 years, it was only 20 years ago that my life really changed because of Torah.  In the 1980's when the personal computer came into vogue, there were Rabbis who put the Torah into the computer to sift out coded messages.  It has been known for thousands of years that the Torah has a vast amount of hidden information in its letter structure; but, until the PC came along, it was difficult to decipher.  When I started to see what Rabbis, mathematicians and statisticians were finding in the Torah, my curiosity was peeked to the point that I had to get the software used for code finding and check it out for myself.  The result of finding this information changed my life.  The question about Who wrote the Torah had been solved once and for all.

There were many skeptics and still are today who say "give me any text and I will find accidental random words in it."  What I have found over the years was that the individual who says such a statement hasn't studied the Torah codes.  Anyone who has looked into the codes, seriously, is totally convinced of its validity.  One reason is (as I have discussed in my blog post Sources of Absolute Truth MARCH 26, 2012) the number of bits of coded information in the Torah that no human beings could have known, is infinite.  If you think that is impossible, you are starting to catch on to my amazement with the subject.  It is so overwhelming that I found no way to avoid the Torah and its message.  I became a Torah Jew knowing that the Torah truly was the handbook of life and the only true source of information to guide me and my family.

So, what did I actually see that changed me forever?  I'm glad you asked since I detected that you too were very curious and maybe even skeptical.  I started to see that everything that was happening in the world can be found encoded in the Torah.  A real eye-opener was when three mathematicians did a controlled experiment that was so impressive that it was written up in the August 1994 addition of Statistical Science magazine.  Their experiment was to subjectively prove or disprove the statistical validity of coded information in the Torah and to demonstrate that it was not due to random happenstance.  Here is a copy of the full report for the curious among you.

The study basically asked "if everything is encoded in the Torah, we should be able to put the full names of the most famous Rabbis in history into the computer and find these individuals."  The find was to be by Equidistant Letter Sequences, ELS.  More simply, ELS is the skipping of letters to find encoded information.  Instead of every letter, maybe every other or every third letter, etc.  They came up with a list of 66 names based on write-ups of these individuals in an encyclopedia Judaic.   The probability of finding all these names (completely spelled out) was extremely low but would be a good indication of it being in the Torah intentionally.  Needless to say, they found all their names (only looking in the Book of Genesis) and next to each of the names they found their date of death.  In later experiments, more recently performed, using much more sophisticated computer hardware and software (doing many more permutations of the experiment), they found their date of birth, date of death, place of birth and more.  All this information in text that was written thousands of years before these Rabbis were born.  The final conclusion in this secular magazine was:

We conclude that the proximity of ELS's with related meanings in the Book of Genesis is not due to chance.

Before I give you some real cool examples of Torah codes, I want to tell you my personal experience in realizing how difficult it is to encode such information and still have readable text.  In the 1990's I was involved with outreach efforts, trying to introduce my fellow Jew to the wonderful world of Judaism.  One of the tools with which Hashem has provided us is the Torah codes.  It was prophesied that in the end of days there would be a big return of the Jewish world to Torah Judaism.  The movement is called the Ba'al Teshuvah movement.  A working cohort of mine, ask me one day "why do you think Hashem gave us the personal computer at this time in history?"  Since the PC allowed many to witness and marvel at the coded messages in the entire Bible, Hashem gave us this tool to prepare us for the time of redemption and Messiah.  Thank you, Hashem.  Because I was so fascinated and involved, I was asked to go to synagogues, schools, Sabbath retreats, etc to lecture on the subject.  Since most people at the time were not familiar with the ELS concept, I constructed a simple example in English to demonstrate.  My slide said:
I am happy to be in your class to tell you a story.

I told the audience that within this statement was a secret code.

I am Happy to bE in your
cLass to teLl you a stOry.
Starting with the H in happy and counting every 8 letters they saw my secret message:
HELLO

This silly example took me about a half hour to construct; but, it gave me great appreciation of this: 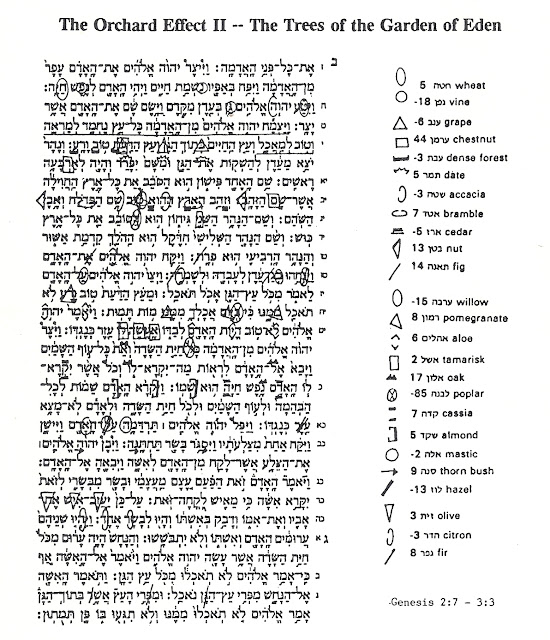 This is the narrative about the Garden of Eden in Genesis.  Encoded within this short paragraph are the names of 25 species of trees that were in the garden (as described in the Talmud).  I am convinced when I see something like this that if we were to connect every computer in the world to one big supercomputer and attached all the brains of everyone alive today (super brain), we still could not write a Torah.

Another example was discovered by Rabbi Michoel Ber Weismandel, a prominent 20th century Jew, without the use of a computer.  As was stated by the Vilna Goan (another prominent Rabbi who lived 250 years ago) every person is alluded to in the Torah. When the Vilna Gaon was challenged to where is a reference to the Rabbi Moses ben Maimon, the Rambam, he pointed to the verse in Exodus 11:9 that shows the acrostic RaMBaM is the first letters of each word in the phrase "My marvels may be multiplied in the land of Egypt."  The Rambam was also a Moses who was great in the land of Egypt in the 12th century.  This is the only place in Torah that you will find the four letters of Rambam as the first letter of four consecutive words.  Rabbi Weismandel was curious to see if the Rambam's most famous work, the Mishneh Torah, was encoded in the text below his name.  The fourteen-volume Mishneh Torah still carries canonical authority as a codification of Talmudic law -- giving great insight into the 613 commandments.  He saw that by starting with the first Hebrew letter mem and counting every 50 letters (a significant number in the Torah) the word Mishneh appeared.  He continued down the paragraph quite a distance and found Torah towards the bottom of the text -- additionally with a letter separation of 50 letters.  But, why was there such a distance between the two words?  When he counted the letters separating the first letter of Mishneh to the first letter of Torah, he saw a separation of 613 letters between them.  What a coincidence?  To add to the code, the Rambam's date of birth just happens to be in the middle of the paragraph.  Cool – huh? 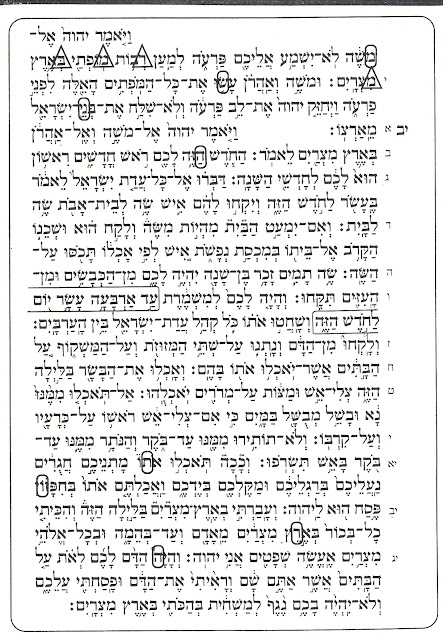 Another code that I like quite a bit deals with the Magila that we read on the holiday of Purim.  Magilas Esther appears in the Torah one time.  It starts in a verse that just happens to have the word Esther in it (the only place in the Torah) and has a letter separation 12,110 letters (the word Magila is in Genesis and Esther is in Exodus).  What is so exciting about finding Magilas Esther with an ELS of 12,110?  That just happens to be the number of letters in the Magila.  Wow, what a coincidence?  You can't make this stuff up.

Two last codes that nobody has ever seen.  My last name has eight letters in Hebrew.  The name is encoded once in the entire 24 books of the Bible.  It has a letter separation of over 19 thousand letters and includes the names of every relative that I have with that name.  In other words, my paternal grandfather was Abraham.  So my last name starts just before the first time Abraham is mentioned and it goes to just beyond the name Betzalel, which happens to be the name of my oldest grandson.  All the names of the rest of the family are within that one finding in the Torah.  What a coincidence?

I have a friend that I went to high school with that is not observant but was interested in all my involved Torah effort.  I told him about finding my name in the Torah and, of course, he asked if I can look for his name.  It's a little involved but there are verses that are commensurate with everyone's birthday (it actually tells you what your mission is in this world and is a good subject for another blog post).  I looked at one particular verse that described my friend and found his first name, his last name and crossing over the word was his middle name.  What a coincidence?

Since I personally have about a dozen books with codes, scores of printouts, over the years, of codes happening in the world events and even a large number of slides that I used in lectures, I could go on for weeks and not show you everything.  Just be totally aware of Who wrote the Torah and that everything and everybody that ever existed, exists now or will exist is in the Torah.  Not just names but every detail of every moment in one's life.  What you had for breakfast this morning, what socks I am wearing today, who you talked to and what you said – there is nothing missing.  What a coincidence?
Posted by The Absolute Truth at 12:50 PM