Gravity and the Shape of the Earth

As is well known, many ancient peoples believed the Earth to be a broad, flat surface supported by immense, mythical creatures - such as four giant elephants standing on the back of an immense turtle, itself swimming in an infinitely large ocean.  Regardless of which animals were doing the work, ancient peoples believed that earthquakes occurred when one of these ungainly creatures moved.  The idea that the world was round was considered not only highly unlikely but ridiculously illogical. 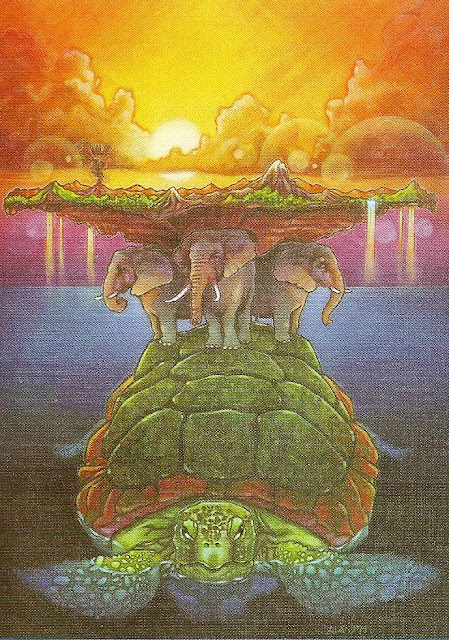 CAUTION:  This is just a representation and not an actual NASA photo taken from space.

It was only in a much later period that some Greek philosophers began to claim that the world was round. Even so, for many hundreds of years, the majority of humankind believed that the Earth was flat, or at best, dome-shaped.

After Christopher Columbus discovered America in 1492, while travelling west in search of a shortcut to India, many individuals became motivated to set out on similar voyages of discovery. More and more of these travellers came to the conclusion that the Earth was indeed round, in opposition the firmly held opinion of the masses.

Slowly but surely, though, increasing numbers of people began to understand that the Earth is indeed round.  Today, every schoolboy knows the truth, and has seen photographs from space of the spherical globe upon which we all live. Nowadays, the flat Earth theory, complete with supporting whales or elephants, evokes in us only a smile.  But we must remember that the only relevant evidence available to the ancient civilizations was what they saw in their immediate surroundings - the fields, the valleys, the endless ocean stretching out before them. They had no good reason to take the leap of the imagination required to think that the Earth was round. In addition, before Sir Isaac Newton (1642-1727) discovered the laws of gravity, there was no logical reason to suggest that the world populated by humans, animals and myriad objects was round.  How could creatures standing on the opposite side of the world, head down, not fall off the planet?!

Once again, the Zohar,' written over 2,000 years ago has something to tell us on this subject. In this instance, it quotes a book written even earlier, by Rabbi Hamnuna Saba in Second Temple times:

"The entire world and those upon it, spin round in a circle like a ball,' both those at the bottom of the ball and those at the top.  All God's creatures, wherever they live on the different parts of the ball, look different (in color, in their features) because the air is different in each place, but they stand erect as all other human beings.
Therefore there are places in the world where, when some have light, others have darkness; when some have day, others have night.
There is a place in the world where the day is long and night is but a short time. It is written: 'I acknowledge You, for I am awesomely, wondrously fashioned,
wondrous are Your works and my soul knows it well' (Psalms 139:14).
And this secret has been passed on to men of wisdom - the wisdom of the Torah."

This short, incisive segment in the Zohar contains some very important pieces of information. Its author knew that:
Torah sages realized that the information at their disposal was not known to the scientists of their times and would seem strange to them, if not bizarre.  Thus, the Zohar concludes that this information is a secret.  It also tells us that this information was not gathered through research, but had been handed down to Torah sages over the generations, who declare: "And this secret has been passed on to men of wisdom - the wisdom of the Torah."  The source of this knowledge is not natural, it is in the Torah.  It is brought down that Adam was shown the entire world and the fact that it was a ball.

A World Hanging in Space

As mentioned earlier, in the past people believed that the world was a flat surface supported by immense creatures, floating on an endless sea.  They imaged that the sky was the roof over the world and the stars were hanging in the space above the Earth like lamps in a vast hall. The floor of that hall was the world in which we live.  But what supports that roof?  The conclusion they reached was that there were four columns supporting it, one at each corner of the great "hall."  This theory might seem strange to us today, but was perfectly logical from the viewpoint of those ancient civilizations.  So far as they were concerned, the roof of such a vast hall had to be supported by something and one column at each corner was an excellent solution.
Rashi similarly writes: "Blimah means without any foundation, because they stand in the air" (referring in this context to empty space).  How must the words of the Torah have sounded to people thousands of years ago, and how do they sound to us today?

What did the Torah say at the time?  In Jewish tradition, the following verse is considered to have been made with prophetic inspiration (as is true for all the other verses in the Bible):
"He suspends the Earth on nothingness." (Job 26:7) This means exactly what it says - there were no supports. Rabbis David and Yechie1 Altshuler, father and son authors of the 18th century Scriptural commentary, Metzudat Zion, explain that the Hebrew word for nothingness - blimah - is comprised of two syllables - bli and mah, which in this form mean, "without anything."

This was another example of how the people who did not open the "Handbook of the Universe" were so uninformed; while those who have and study Torah have and live by the Absolute Truth (love that expression).

Posted by The Absolute Truth at 7:38 AM