Many have wondered: How is it possible that the Torah - which has bestowed upon humanity the universal values of sensitivity and compassion toward others - commands that the only acceptable way to prepare meat for consumption is through Shechita, Jewish ritual slaughter?  There has been much controversy around the world about Shechita.  Many countries and even states in the United States have questioned whether it should be allowed to continue.

This question is even more relevant, seeing that the Torah explicitly prohibits the infliction of needless pain on animals.  Compassion being such an essential Jewish value, how can the Torah demand that people slaughter cattle with a knife, while prohibiting more commonly held practices, such as shooting the animal in the head with a bolt gun, which is said to ensure a quicker, less painful death?  Indeed, the Torah forbids us from knocking the animal unconscious in any way before it is killed, such as by striking it with a heavy object or stunning it with electric current - standard practices throughout the world, which are claimed to lessen the animals' suffering.

In previous generations it was widely accepted that the laws of Shechita ensured the least pain and suffering for animals.  For this reason, the Torah requires ritual slaughter to be performed with a completely smooth blade.  Ritual slaughterers are required to inspect Shechita knives carefully for proper sharpness.  The slightest nick - such as can be discerned by lightly running a fingernail across the blade - deems the knife unfit for Shechita, and prohibits the consumption of any animals slaughtered with it.  Furthermore, Jewish law demands that Shechita take place quickly, with one rapid movement of the knife. These requirements were created so that the animal would feel little or no pain in the process.  Based upon the testimonies of individuals who have been inadvertently cut in a similar manner (such as a surgeon performing emergency medical treatment), a quick, sharp cut of a sharp knife is essentially painless.  In fact, it is usually only after the blood starts flowing that they realize they have been cut. According to the Sages of Israel, however, it is the slaughtering methods of other cultures that cause the greatest levels of pain and suffering to animals.  This traditional Jewish perspective - convincing enough by itself - has been greatly substantiated in recent times by an astounding series of experiments concerning the structure of the blood vessels and arteries in mammalian brains. These experiments erase all doubts about Jewish ritual slaughter, adding the topic of Shechita to a long list of proofs of the Torah's divine origin.

At the base of the brain of all mammals rests a ring of blood vessels and arteries creating a kind of "central station" for all of the blood flowing to the brain.  This central station is known in humans as the Circle of Willis and in animals as the Rete Mirabile.  Every beginning physician knows that the sudden loss of blood pressure in this central component of the brain immediately leads to unconsciousness.

At the time of Shechita the carotid arteries serving as the central route carrying blood through the neck to the brain is severed.  The instant the knife passes through these arteries, blood flow to the brain ceases, blood pressure drops rapidly, and the animal looses consciousness within two seconds, if not sooner!

This means that the animal can feel no pain from this point forward.

To summarize, Shechita does not involve any pain for the animal, thanks to the sharpness of the knife, the quickness of the cut and the immediate loss of consciousness.

On the other hand, non-halachic (not according to Jewish law) forms of slaughter undoubtedly cause pain to animals.  Even numbing the animal with an electric shock, which supposedly prevents any feelings of pain, actually only "fries" the beast's brain, and certainly causes unnecessary suffering.  And of course, death through a bolt to the head surely engenders suffering in the animal, especially if delivered inaccurately, whether due to poor aim or an unexpected movement of the animal's head. In these cases, levels of pain are far from minimized, and in fact, greater and unnecessary suffering may take place."
Though it is true that the body of an animal "jumps" after loss of consciousness following Shechita, research has shown this to be a mere muscle reflex, much like the movement of a lizard's tail that has been severed from its body.  An unattached tail, despite its involuntary, reflexive movement, certainly does not feel pain.

It would have been enough to end our discussion with these highly convincing points, but now we come to a true wonder.

Here modern research has made an incredible discovery. While it is true that all mammals have front and back arteries, all animals with cloven hooves that chew cud - meaning those kosher animals (being the only ones that the Torah allows Jews to eat) - have a different structure in the arteries at the back of their neck.

Whereas in non-kosher mammals, these arteries enter directly into the "central station" of the brain, in kosher mammals the rear arteries first connect to the front artery before entering the brain.  Most of the blood that reaches the brain flows through these front arteries.  Thus Shechita - performed on kosher animals only from the front - almost instantly halts blood flow to the brain.  For the blood that reaches the brain via the vertebral arteries immediately changes direction and flows away from the brain, towards the point of least resistance, and out from the cut.  The result is an immediate drop in blood pressure and a loss of consciousness in the animal, providing total assurance that it feels no pain.  To conclude, thanks to recent research into the circulatory system of various animals, the very question which challenged the Torah's Divine authorship now proves its transcendental source.  For who other than Hashem could have produced this amazing physiological distinction between various mammals, and forge such a unique connection between halachically defined kosher animals and their physiological structure, while at the same time teaching us how to slaughter these animals in a manner inflicting no pain or suffering? 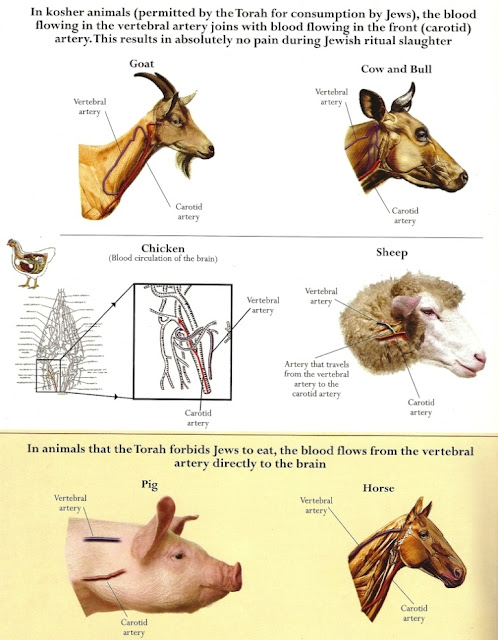 There is yet another difference between kosher and non-kosher animals.  A study conducted in 1961+ demonstrated that horses, dogs, and other animals resist being brought into slaughterhouses because they sense their approaching death.  They become agitated, and may even kick and fight until they are killed.  In kosher slaughterhouses, this phenomenon is almost non-existent.  For example, lambs present at the slaughter of other lambs do not show signs of fear.  A calf allowed to roam freely during a period of Shechita did not attempt to run away, even though the door of the slaughterhouse remained wide open.  In addition, cud-chewing animals will cease to ruminate when they are under stress.  However, cows in a Jewish slaughterhouse may even sit and ruminate while members of their own species are being slaughtered around them.  All this indicates that not only do kosher animals not suffer during ritual slaughter; they do not even experience emotional discomfort before the act, and have absolutely no sense of their impending deaths.

Still, since there is always the possibility that one of such animals will be more sensitive than the others, Jewish law forbids killing an animal in the presence of another, in order to prevent even the slightest chance of suffering to the one remaining alive.

It is also worth noting the medical opinion of Dr. Temple Grandin, a worldwide expert on proper livestock handling, who has developed various techniques to decrease animal suffering both on ranches and in the slaughterhouse.  Dr. Grandin claims that the major suffering incurred by animals in the slaughterhouse is not in the moment they are killed, but from their improper handling from the moment they arrive until their deaths.  According to her findings, if cattle are handled properly, they reach the point of slaughter relaxed and well behaved.  Because, in the case of Shechita, the actual slaughter is painless, it is clear that proper handling erases the only other chance for animal suffering to take place.

There is still more.

Meat slaughtered for consumption must be kept hygienic and safe throughout the duration of its storage, both for health reason – to avoid food poisoning – and economic ones – so as not to needlessly waste food.  In general, the higher quality the meat and the fresher it can be kept, the less needs to be discarded and the fewer animals need to be slaughtered.  According to some researchers, Shechita ensures higher quality meat than other forms of slaughter.  Shooting, for example, leaves an excess of blood in the carcass, due to the time lag between death and the bleeding of the carcass.  This causes the meat to spoil faster.  In other non-halachic methods of slaughter, the situation is even worse.  (With regard to this topic, we should note the halachic requirement to salt meat after slaughter in order to extract the remaining blood.  This act is derived from the prohibition against consuming blood – primarily a spiritual commandment, which has obvious health benefits as well.)

I have one more question that needs attention.  Why, if Shechita is painless and the most humane to kosher animals, is the world so blind that it wants it stopped?  Simple answer, Hashem is sending a message to the Jews "It is time to come home."  If, eventually, the only place in the world that a Jew can be a Jew; serve Hashem and observe all of the Torah is ISRAEL, (you finish this sentence).  Thank you Hashem – Your message is clear.

Posted by The Absolute Truth at 11:03 AM