Before I can really get into the meat of the topic and the purpose of this blog (what all this truth means and how we need to react and prepare), I need to wow you with the fact that Hashem has given us information about everything in this world that has happened, is happening and will happen.  The biggest problem that I have is that it is an overwhelming amount of information that is known.  My dilemma: how do I very concisely write it on a blog.  I personally have about 600 books (in English, not including the Hebrew books) that are mostly concerned with this topic.  There is an organization that sells a hard drive compendium of Hebrew books that have been written over thousands of years.  They cover scriptures and all the commentaries written in support of what is known, or more appropriately put, what Hashem wants to tell us about everything.  That hard drive is now at 60,122 Judaic books of information (last year when I wrote about this it was at 53,367 books).  Hopefully, you see my problem.

Enough excuses.  The next source to be disclosed is the remainder of Jewish scriptures.  This includes, but is not limited to, the remainder of the Bible, the Oral Torah (commonly called the Talmud), the Zohar and others.  Scriptures are replete with prophecy.  In the Torah, for instance, every word, every letter, every combination of letters (thousands of ways to combine and read the letters), even the numerical value of each letter (another subject to be discussed) has profound prophetic significance.  We have a long list of prophecies that we are told will happen in the time preceding the end (meaning the redemption, Messiah, 3rd Temple, etc).  I have been actively involved for about twenty-one years in comparing what is happening in the world to what will happen just before this time of redemption according to scriptures.  With great excitement I can report to you that all the events have already happened over thousands of year or are happening now, with completion being imminent, and all has come true as written.  The most important concept to take from this is that all of history is in scriptures and most of history is completed with total accuracy according to the prophecy.  My confidence level, that what has been given us in scriptures is the absolute truth (I love those words), is unshakable.  I will only give you a few of my favorite examples since I could write volumes on the subject.  One thing that I have found to be true is that my telling you of exciting items that I have experienced, especially miracles (which I could talk about for hours), is meaningless.  You digging and experiencing your own discoveries is what does it for you.  I hope to direct you in several posts in the near future to sources, books, videos, etc that will teach you what it’s all about, B"N (bli neder means without taking a vow -- it is considered very serious in the eyes of Hashem to promise something and not deliver.  I do not wish to be in violation and will add B"N to such statements).

For now, let me tell you some prophecies that demonstrate how Hashem talks to us and guides us.  What makes these examples chilling is the detail, not generalities.  One example can be found in Isaiah 21 which talks of the prophecy of the downfall of Babylonia.  Babylonia is modern day Iraq.  This particular prophecy sounds allot like the 1991 Gulf War.  How so?  Isaiah begins by saying that it will be like “Desert Storms.”  Either Isaiah called the Pentagon 2700 years ago to ask them “what are you going to call this war?” or we have a very chilling prophecy.  Many more details can be seen in Isaiah and Jeremiah.  This was very nicely written up in a commentary from Professor Paul Eidelberg of Bar-Ilan University: 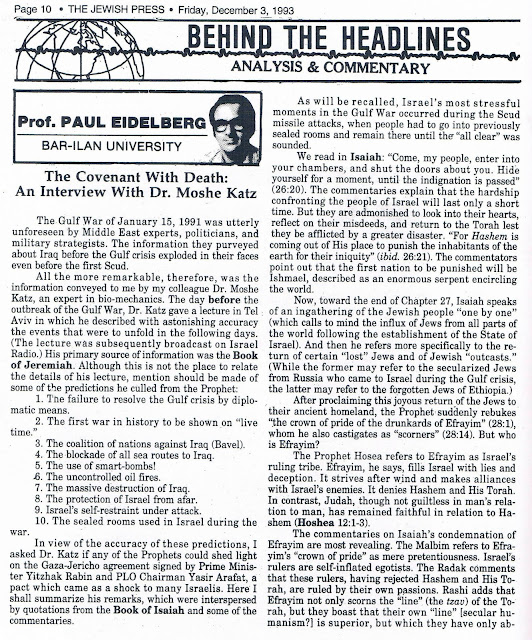 We get miraculous prophecies even from Rabbis down through the ages.  Rabbi Shlomo Yitzhaki, who lived in the years 1040 to 1105, is known to us as Rashi (all the great sages throughout history are referred to by abbreviated names -- either an acronym or by a book that the Rabbi wrote).  Rashi wrote miraculous commentary on the entire Bible and the Oral Torah.  In Ezekiel 47 we get a prophecy of waters flowing from the Temple Mount and going all the way to "Galila."  The waters represent the study of Torah which will come out of Israel and spread throughout the world (the prophecy has been fulfilled).  But what is Galila?  Rashi explains “to America.”  What?  A Rabbi who lived about 400 years before Amerigo Vespucci (March 9, 1454 – February 22, 1512), whom America was named after, knew about America?  No way.  Oh contrar -- yes way.  But, since Hashem put the commentary into the mind of this great Rabbi, he was able to tell us the name of a place centuries before there was such a place.

Another miraculous bit of information.  In the Torah Hashem tells Moses that the redemption will not happen until the two giants, Sichon and Og, are destroyed.  Sichon and Og were two kings who were a hindrance to the Israelites entering the land of Canaan.  The statement is, as mentioned above, a prophecy that will take place in the future before we have the final redemption -- that the two giants will be destroyed.  A Rabbi Yehudah Aryeh Leib Alter (1847–1905), also known by the title of his main work, the Sfas Emes called the two giants “towers.”  The Talmud (Tractate Berochos) tells us that Moses who was ten cubits tall, had a sword that was ten cubits long and that Moses could jump up ten cubits.  He was able to reach the ankle of Og by reaching 30 cubits.  If you multiply 30X24 (the ankle is proportioned at 1/24 the height of the body) and using the length of just under 22 inches for the length of a cubit (according to several distinguished Rabbis of modern time), we come to approximately 1350 feet.   What a coincidence that that just happened to be the height of the World Trade Buildings 1 and 2.  Sichon and Og represented materialism which Moses has to destroy for the Israelites to enter in a higher spiritual level.  The World Trade Towers were the epitome of materialism in modern times.  Hashem didn't make the towers fall, but was aware of the event when He gave us the Torah and gave us the prophesy through Sichon and Og.  One additional note was that Sichon was slightly taller than Og and one of the towers was with an antenna that put its overall height slightly above the other.  A tremendous amount of information is found in the Bible, encoded in the Torah and described in the Zohar about 911 (Zohar parshas Balak talks about 3 walls falling, since building 7 also fell that day, the sun being blotted out by smoke and dust clouds, a palace like structure being attacked, referring to the Pentagon, etc).  I actually have a book, 264 pages long, that gives extensive detail.

Enough for today.  This subject can go on for thousands of pages but, once again, it would have more of an impact if you discovered the information yourself.  I will, however, be bringing up more exciting and mysterious findings as I go along.  Many subjects to talk about, not enough time to do it.  The most important concept to observe is that these are not generalities open for interpretation, but are replete with very specific details including dates, places and names, either read outright or encoded -- but irrefutable.
Posted by The Absolute Truth at 7:14 AM