The Summer Olympics begins Friday, July 27, 2012 with the opening ceremonies beginning almost exactly the same time as Tisha B’Av in London (which this year falls on Shabbat making Tisha B’Av a feast day instead of a fast day).  There is so much speculation that the Olympics contain messages from Hashem about the Geula.
This was suggested to me by one of my readers:
According to the Zohar, before the coming of Moshiach a very special rainbow will appear. This rainbow will be so bright that all rainbows that have appeared on earth will seem very dim and weak in comparison. The bright strong colors of this rainbow are a sign that the Redemption is about to come. It is this rainbow, the Zohar tells us, that Hashem was speaking about when He said to Noah (Gen. 9:16), "I will look at it to recall the eternal promise." (Zohar 1:72b)
Take note of the rainbow symbolism in the London Olympics commercials. 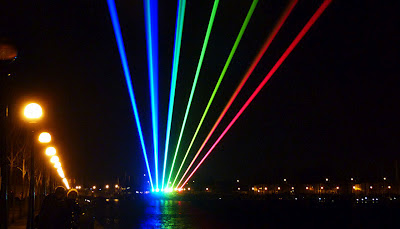 We have already seen how the 2012 of the Olympic symbol resembles the word ZION.

The first clearly has the shape of a Z and the second has a different shape and is inclined to give it the appearance of an N.
There is even a dot on the letter I that had no reason to be there.

Hard to believe that this is only by chance that when you read down instead of across you see ZION.

The messages these days are many.

Posted by The Absolute Truth at 2:32 PM