The following is the Torah's awe-inspiring description of the theophany at Mount Sinai:


"And it came to pass on the third day, in the morning, that there was thunder and lightning and a thick cloud upon the mount, and the voice of a horn exceeding loud; and all the people that were in the camp trembled ...

Now Mount Sinai was completely on smoke, because G-d descended upon it in fire; and its smoke ascended like that of a furnace, and the whole mountain quaked greatly.

According to the Talmud, the words: "All the people saw the sounds," mean that the Israelites actually saw the sounds of the Ten Commandments; that is, each word spoken by Hashem took the form of letters that pierced the sky like lightening.


Exactly what form did those letters take?


The ancient Kabbalistic text, Sefer ha- Yetzirah, discusses the spiritual significance of the Hebrew alphabet.  In contrast to man-made letters, which are merely conventional, the Hebrew alphabet is considered to have been given by Hashem, and represents profound spiritual forces - in modern terms, different energies that flow through each letter.  For example, the letters of Hashem's command: "Let there be light" - va 'yehi ohr actually convey and bring into being the infinite varieties of light found in creation: from the visible to the invisible, from the spiritual to the manifest.  Although the Talmudic Sages disagree upon which script was used to write the Torah given at Sinai,  the Kabbalists clearly state that it was the same script used today in writing a Torah scroll - the square Hebrew lettering known as the Ashuri (Assyrian) script.  According to Kabbalists, this name has nothing to do with the Assyrian Empire, but derives from the shape of the letters, which are a confirmation (ishurin Hebrew) of their inner meanings, and bestow happiness (osher) upon those who can penetrate their secrets.


In our time, two Israeli scientists - Chayim Yaakov Guggenheim and Chayim Ben-Harav-Chai Elbeze - have each made an amazing discovery that illuminates the shape and sound of the Hebrew letters.

Chayim Yaakov Guggenheim is an Electro-optics Engineer at Aircraft Industries of Israel.  He was part of the team that developed the Lavi fighter jet.  When he came across the statement of the Sages above, it sparked in him an idea.  Today, sophisticated instruments can transform sound waves into images that can be displayed on a computer monitor.  Guggenheim wondered if it was possible to use these instruments to display, in tangible form, the ancient Jewish understanding that the sound of the letters actually correspond to their shape.

Guggenheim was initially skeptical, particularly in view of the fact that our present-day pronunciation of a number of the letters differs from the original spoken Hebrew.  Despite his skepticism, and much to his amazement, he discovered that the sound waves for seventeen out of the twenty-two letters of the Hebrew alphabet create an on-screen image very similar to the shape of the written letter itself.

All the details of the experiment were written in an article by Guggenheim, which describes the way in which the experiment was performed, its reliability in scientific terms, and the conclusion he draws. The article is too extensive and technical for reproduction here; but, I have copied some of the actual computer generated images of the Hebrew letter.  This is actually seeing the wave generated by the sound of the Hebrew letter. 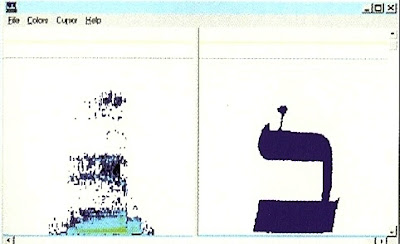 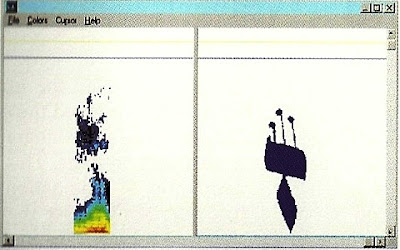 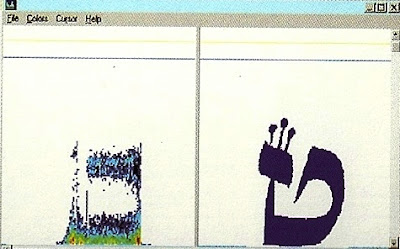 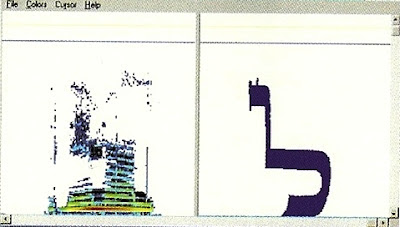 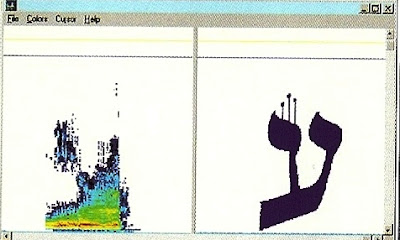 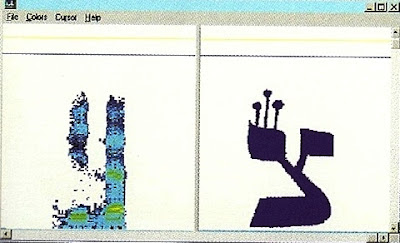 What follows is an experiment of the computer generated images of English letters. There doesn't seem to be a mystical representation of the English.  It's a good thing Hashem used Hebrew at Mount Sinai.

Posted by The Absolute Truth at 10:34 AM