Many people have claimed to be able to see the human aura - a shimmering glow that surrounds each individual, with colors and hues that change depending on the person and his or her moods.  However, since none of these people could prove their visions, science has traditionally scoffed at their claims. This attitude of disdain was also suffered by the first scientific researchers into the phenomenon of the human aura: Nicola Tesla of the United States and Roberto Landell de Moura of Brazil. Tesla demonstrated in 1888 that a human body exposed to an electromagnetic field at high frequency and tension generates a shining aura.  In 1904, de Moura invented a "bio-electrographic machine" that captured images of auras hovering around people. However, these discoveries were given scant attention by the scientific community.

Only in the middle of the twentieth century did a change occur in this attitude when, in 1939, Simeon and Valentina Kirlian discovered that the application of a high-frequency electric current during photography resulted in the image of a light aura around the individuals, or the objects being photographed.  Following this discovery, the couple developed the Kirlian Camera, a device that captures the ultra-violet light in its images.

This discovery created a stir amongst scientists around the world.  Biophysicists and biochemists in the Biophysics Laboratory of National University at Alma-Ata in Kazakhstan, where Kirlian worked, used an electron microscope to conduct many experiments on the energy fields recorded by Kirlian's images.  This energy field became known as the "biological plasma body."  (Plasma is an ionized gas in which atomic particles are separated from all of the electrons in their environment.)  A Soviet scientist, Professor V. M. Inyushin, a colleague of Kirilian from the same university, summarized the results of this research in the following manner: "The biological energy common to all living organisms is known as bioplasma.

Dr. Thelma Moss (1918-1997), a psychologist at the University of California, expressed these ideas in simpler terms. According to Dr. Moss, the aura is "spiritual energy released from the body."  An American researcher, Dr. Kendall Johnson, has said: "This gives us the possibility to look into the non-physical side of life."

Further research discovered a clear connection between the main points used in Chinese acupuncture and the spots where the aura gives light.

Recently, researchers have come to an even deeper understanding of the phenomenon.  The German scientist, Peter Mandel, has developed a therapeutic practice based on the human aura called "Esogetic Healing."  Mandel has proved that the human body contains within it and around it a field of energy unseen to the naked eye.  However, it is possible to photograph these fields with special cameras.  For many years, Mandel traced the changes in the colors of auras, analyzing the relationship between the forms of auras and various energy imbalances in parts of the body.  Mandel found a clear connection between disturbances in the aura and various diseases.  Moreover, it appears that diseases reveal their presence through changes in the aura before their symptoms are noticeable in the body.  Health problems take the form of dark stains or marks in the aura's field."

Today, it is common to use the "Aura Video Station", which was invented by Johannes Fisslinger in the early 1990's, or the similar "Aura Camera" devised by Guy Coggins - to view auras.  These devices use advanced biofeedback as well as a computer, a video recorder or camera, and special, highly sensitive sensors.  A subject places his or her hand on the sensor, which registers factors such as the electromagnetic energy released by each finger, temperature, humidity, and more. The sensor transmits the information to a computer that translates the data into frequencies, leading to the specific colors appearing on the screen.  The screen shows images of auras in colors that change from person to person.  Fisslinger tested the Aura Video Station with hundreds of "clairvoyants" who claimed to see auras, in order to compare their descriptions of what they see with the images produced by the device.  The descriptions of the people and the device matched in 86% of the cases he compared.  If we take into account that people may identify the same color differently (what one person calls dark orange another might call bright red), this percentage is remarkably high.

Today, a commonly used system which interprets the meaning and influence of colors upon the psyche is based upon the work of a Swiss psychologist, Max Luscher.

The Aura Video Station lists colors in an ascending order, from the more material to the more spiritual: red, yellow, green, blue, and white. Between these are also intermediate colors.  Between red and yellow there are light red, orange, and orange-yellow.  Between yellow and blue there are yellow-green, green, and light blue.  Between blue and white there are purple and light purple.  Therefore, a deep red aura indicates a materialistic person low on the spiritual scale.  Higher level colors indicate higher levels of spirituality.

Once, during a speech Rabbi Zamir Cohen presented to an academic audience at the Paradise Hotel in Be'er Sheva, Israel, he commented on the Kabbalistic meaning of the commandment of Tefillin - the leather boxes donned each weekday by Jewish males.  He described the familiar black, square boxes containing four biblical verses, hand-written with a special ink upon parchment made from a ritually pure animal, as well as the black straps used to bind it onto the body.  According to Kabbalistic masters, when this unique construction is tightened around the bicep of the left arm, pointing towards the heart, and on the "entrance" to the head - "the place where the head of an infant is soft," in the words of the Talmud! - a unique spiritual energy is channelled into the human soul, directly to the parts of the soul that rest in the heart, which are responsible for emotions, and to the brain, the seat of thought, understanding, and memory. In both cases the person wearing Tefillin is spiritually uplifted, and the quality and level of his thoughts and emotions improve. In addition this energy creates a spiritual shield around the person who wears Tefillin.  These are only some of the wondrous benefits that a person donning Tefillin gains each day, in fulfilling the will of Hashem.

Upon hearing this lecture, Dr. Arik Naveh - one of the senior physicists in Israel and an important lecturer in his field - decided to test its claims scientifically.  He gathered eleven scholars - all secular Jews - and asked them to participate in an experiment in photographing auras, first photographing individuals without Tefillin and then images with Tefillin. The results were incredible!

For all of the participating subjects - without a single exception - the laying of Tefillin drastically changed the color of their auras, adding an unusually high spiritual level; that of the color purple, which is surpassed only by the color white, the rarest of all colors in the aura spectrum. 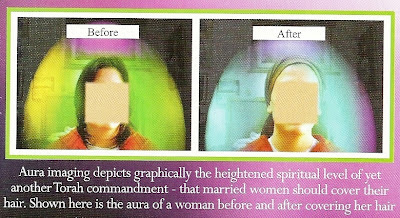 These experiments led to a consensus among researchers of the aura that Tefillin can raise a person's spiritual level, as well as protect one's body from negative external energies.

Dr. Naveh has since expanded his research and tested many other subjects.  In each case, the results affirm the conclusion that Tefillin increase the strength and level of the aura, as testified to by the accompanying pictures.

Now we will take a brief look at this topic through the teachings of the Torah and the Kabbalah.  We will examine the spiritual light that enclothes a person while wearing Tefillin. This will also serve us as an example of the depth and complexity of Hashem's creation normally hidden from our awareness - but revealed in the Torah.

The Holy Zohar states: "On last night of the holiday of Sukkot - which is the night of Hoshanah Rabbah – when the notes upon which are written the judgments of all people for the year leave the King's House -- the shadows of those destined to die in the year are taken away.  When the shadow is cut away from a person it is carried up to the archangel, Metatron who senses through the shadow the person's strengths and his proper place [in the heavens]."

The commentary on the Zohar, Matok Midevash wrote about this: "The shadow is in the intermediary between the spirit and the body, and all of a person's deeds are recorded on it."

Along these lines, the Talmud states that a human being not only has a shadow, but a "shadow of a shadow" (as opposed to certain spiritual beings that only have one shadow).  On this, the great Kabbalist - the Arizal, Rabbi Isaac Luria, commented: "In one verse it says 'A man walks as though a shadow [in Hebrew: tzelem)' (psalms 29:7). This implies that there is only one shadow. Furthermore, it is called tzelem and not tzel (the more common form of the word).  Another verse says: 'Until the sun spreads and the shadows [in Hebrew: tzal'lim] flee' (Song of Songs 2: 17).  This implies that there are two shadows.  Furthermore, they are not called tzelamim (the plural tzelem) but tzal'lim.  Thus, there are differences between these two verses.

I need to impress upon you the heart of the matter.  We know that the soul is comprised of five parts, each one higher than the one before it.  Their names are nephesh, ruach, neshamah, chidah and yechidah.  All of these five parts together are referred to as the soul of the person, residing in his body.  In addition, there are three other elements of lower quality than the soul and its five parts.  These are the three "shadows" of a person: the highest of these is called tzelem.  The two elements lower than tzelem are both called tzel, lacking the final Hebrew letter mem.  This is the secret meaning of the verse "a man walks as though a shadow" and of the verse "until the sun spreads and the shadows flee"; for there is one upper tzelem, higher than the two lower tzlal'lim.


Whether we believe that the results of these experiments are showing us soul, shadow, aura, or whatever, the fact is we are spiritual beings enwrapped in physical clothing.  Our spiritual is the most important part of our existence since it goes on forever.  The wellbeing of our spiritual is usually the least important concern that we have on this Earth in this life, but we can see that there are important efforts that we can make that enhance our spiritual level.  Everything that I have been talking about – the mitzvot, repentance, charity, prayer, studying scriptures, helping our fellow human being and loving Hashem – all serve to enhance our aura.  When the "too late date" gets here (I actually hinted above what I believe that date is) whatever we have accomplished is what we live with forever.  Keep up the good work or get started with the good work – your eternity and the eternity of your loved ones depend on it.
Posted by The Absolute Truth at 11:39 AM