Who Owns This land?

NOTE:  If you are visiting my blog for the first time, please scroll to the bottom and read my first post, which explains the purpose of this blog and what it means to you.

There is no more controversial land in the world than the .  Wars have been fought over it and, for some strange reason, this country, the size of the state of New Jersey, is in the news and on the agenda of many governments and the United Nations, more that any other country in the world (except, perhaps, for the US of A).  Why?

The answer has a similar connotation to the topic of yesterday – Jew hatred.  Who is the real owner of the land?  HASHEM!!!!!!!!!!!!!!!!!!!!!!!!!  Of course, He owns the entire universe, so the is on the same deed.  But, what did the Owner say about the land.  Also, in all fairness to the world -- especially those who don’t go by the word of this Owner, what does international law say about this land?

was the name given to Jacob after he fought the angel.  The country was named the of meaning that Hashem told Jacob, or , that this land belongs to his descendants.  Of course, this was the same message that was given to Jacob’s father, Isaac and his grandfather, Abraham.  Later it was told to Moses and all the Israelites (called as such since they were the descendants of ).  The Jews or as they were referred to in the time of Abraham, the Hebrews, have dwelled in this land for over 3700 years.  Even with two exiles, which were accompanied by the destruction of the , there has always been a Jewish presence in the .  So it looks like, biblically, the belongs to the Jews.  Moses was even told exactly where the borders are.  Miraculously, those borders match the area that the Jews live in today. 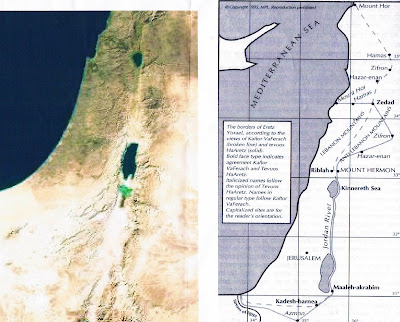 We are told in the Bible that when the Jews return to there homeland, this land that has remained desolate for close to 2000 years, will miraculously start to produce.  After 1948 this totally useless land that many cultures tried to unsuccessfully cultivate, became some of the most fertile producing farmland in the world.  Hundreds of millions of trees have been planted since 1948 and in present time exports produce in great quantity.  They even designated the area where the Jews live “the green line” since the areas where non-Jews live is still not fertile and still remains desert.  This is a strong message from Hashem that His people are returning and the end of history, as we know it, is about to occur.

With the second exile in the year 68, some crazy Roman renamed the country (mostly because he couldn’t pronoun Philistine).  Even in the almost two thousand years, that the country was called , there was still a presence by its designated owner, the Jews.  Before 1948, the Palestinians were the Jews.  I have neighbors who were born here before 1948 who joke about the fact that they were the real Palestinians.  They became Israeli’s when the country was once again named .  In 1964, with the forming of the Palestine Liberation Organization (a terrorist group), they started a very well organized propaganda campaign and pretended that the Arabs who live in were the real Palestinians.

The British Mandate (in effect, British rule) of , including the Balfour Declaration, was confirmed by the League of Nations in 1922 at the conference.  It came into effect by treaty in 1923.  The boundaries of were drawn by the British and included modern Jordan, which was called Trans-Jordanian Palestine (you mean there is a that exists today that is much bigger than ?).  The declaration included the wording “His Majesty's government view with favor the establishment in of a national home for the Jewish people.  This eventually led to the establishment of the State of Israel in 1948 by the newly formed United Nations.  The problem was that the UN took away 82% of the land designated for the Jews including most of the area that was biblical .  It was well known that the United States State Department advised the then President Harry Truman to sign in favor of the Jewish state but only because the was convinced that 5 mighty Arab armies would obliterate this new nation.  How noble of the and many other Jew hating countries who thought they had the next final solution.  Hashem had other plans.  To this day the military will never teach the tactics of the Israeli army use in the 1948 war since miracles aren’t part of military tactical training.  had no army to talk of, no armament to fight with and only One top General to lead them – Hashem.  I guarantee that in every war that followed (1956, 1967, 1973, 1982, 1991, 2006, and all the terrorist attacks in between) was not as mighty as they thought and has to rely on great miracles to experience the success they enjoyed.

So what does it mean when you see in the news how is constantly trying to occupy Arab land.  It is the most effective propaganda from terrorist groups and has the complete support of the Jew hating media and Jew hating nations of the world.  All of the land from the Jordan River to the Mediterranean Sea is .  The only way that land can be given to someone else is by a legal treaty such the treaty that resulted from the San Remo Conference, 1920, that gave the back to its owners the Jews.  The UN resolution of 1947, the Oslo Accord of 1993 and any other bogus agreements to give the land away are not legal by international law – it can only be accomplished with a treaty.  Another consideration is that any country that is attacked and wins territory in that war, keeps it.  Why does have to give back land to Arab terrorist organizations that they won in war and belonged to them in the first place.  The Arabs of the have about 650 times the amount of land that the Jews have.  If we talk about Islamist countries, we increase to over 1000 times the land area that the Jews have.  The Jews are in great shortage of land, the Arabs are not.  What is even worse is that the Arabs don’t even want the land.  When we hear speeches in English they talk of the horrors of the Jews stealing their land.  When they talk in Arabic (in their mosques, for instance) they tell their true agenda – we want all the Jews dead.  What is even sadder is they say “first the Saturday people, then the Sunday people.”  In other words the bottom line is to kill all the infidels and make the entire planet Islamic.  They are making great strides since the Jew hating gentile world supports their efforts even though it would mean the demise of all gentile nations.  I wish ’s propaganda was that good.

All this is prophesied in the Torah.  In the book of Deuteronomy 32:21, “They have moved Me to jealousy with that which is not G-d, they have provoked Me to anger with their vanities; and I will move them to jealousy with those which are a non-people; I will provoke them to anger with a foolish, senseless nation.”  In other words, Hashem is telling us that when we are not doing His will (since Israel is being run by a secular government that does allot of improper things) he will provoke us with a vile people who are not a sovereign nation but, as in this case a bunch of terrorists, pretending to be a government. I end by quoting an organization that wrote an article in their magazine several years ago.

They said “We know the land belongs to you, but as long as you fear people more than you fear G-d, you do not deserve the land.”  Who said such a truism?  It appeared in the first addition of the new Al Qaeda magazine.  Our enemy knows more about our mistakes than we do since Hashem uses them to bring us around to what we are supposed to be doing in this world.

Posted by The Absolute Truth at 1:23 PM